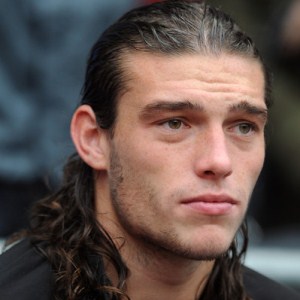 Andy Carroll and Darren Bent. World class? Hardly, IMHO. However, between the two men, nearly £60m (close to $100m) was shelled out to obtain their services, notwithstanding the personal contracts they agreed.

As I am not a Liverpool or Aston Villa supporter, I honestly don't really care about the details of his transfer. However, if I was a Red or a Villan, I'd be incensed about the massive outlay to secure the signatures of the missing Geico caveman and the 5th member of Jagged Edge.

Let me first state that I understand the circumstances of the transfers. For both clubs, an immediate goalscoring boost was necessary in a short amount of time. In Villa's case, goals were coming less frequently than a music video on MTV, while Liverpool's Fernando Traitorres (Kregg Laundon™) put his faithful employers in a bind by requesting a transfer with just three days left in the January window. Both men are proven Premier League goalscorers, England internationals and fairly young (especially in Carroll's case).

However, I maintain that a much better deal could have been struck for the strikers, or at least other players of their ilk. Reports abounded that 30-year-old Brazilian striker Luis Fabiano was available for around £10m, almost a steal for the prolific Sevilla goalscorer. In addition, ready-made goalscorer Klaas-Jan Huntelaar was also reputedly available from floundering German club Schalke.

While this is all admittedly wild conjecture, my point is that with a bit of work, I feel a better deal could have been struck for both clubs. In this case, I believe that applies a bit more to Liverpool than Villa, as Darren Bent has an exemplary goalscoring record in the Premier League and was bought for the relatively "cheap" price of £24m compared to Andy Carroll's £35m for 11 Premier League goals.

Again, I admit that I do understand the circumstances surrounding the transfers. But as a casual observer I could not do anything but sit in front of my computer and say WTF. The valuation of these players is wildly inflated, especially for *braces for insults screamed through computer* English players. And lest I forgot to mention it, Andy Carroll has a ponytail!

All in all, my point is that the January transfer window always proves to be a ridiculous proposition with clubs scrambling to complete deals that often don't make sense in the long run, or even in the short term. I haven't even touched on the fact that Spaniard Fernando Torres, in the midst of perhaps the worst form of his life, was sold from Liverpool to Chelsea for nearly £50m. Foolishness.

Finally, as a bit of perspective, here are the top 11 most expensive transfers of all time...