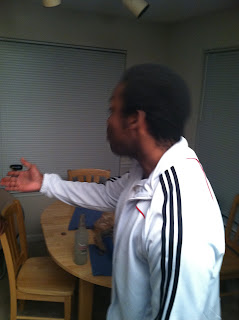 I'm bored, I'm feeling creative bored and I have an inexplicable good-naturedly malevolent feeling towards mankind.  What's that you say?  That's an oxymoron?  Aso not a word?

Suck on a habañero clown.

Since this has been done before and it's easy, I've decided to direct this not-so-legitimate hatred towards one of my good buddies Andre Sherard.  That's right, I'm talkin to you fool.  Your tweets flood my timeline so I'm gonna flood your life with some hatred.

Let me tell you a story about Andre Sherard.

Andre was born at a very young age in Mizzizzippi.  From the age of 2, Andre exhibited a propensity for slurring his words, sleeping on people's couches and talking to the TV while no-one else was around.

Andre first kicked a soccer ball at age 5, but not before he had kicked 12 people on a neighboring pitch just for approaching said soccer ball.  At age 8, Andre approached a girl he liked but instead of talking to her, he wrote her a note and swallowed it.  He then became angry at the girl for not responding to his note.  The girl later saw Andre look at her angrily, liked it and they dated for 7 years.

Andre went to the doctor for a routine checkup at age 10 and it was discovered that he is in fact the only living Black Ginger.  He exhibits every sympton of Gingerness (no soul, disliked by 99% of the population of Hungary, insatiable appetite for virgin dolphins) without the physical appearance of a Ginger.  The sole benefit of being a Black Ginger is his slight relation to partial Black Ginger Blake Griffin of the LA Clippers.

Andre starred at the gay sport of kickball in his early years, leading many Southerners to say "DAT BOY FAST" and "LOOK AT THAT COLORED FELLA RUN".  He went on to star at kickball at UNC Chapel Hill and later in New Zealand where he allegedly was caught in a tryst with several hobbit extras and Gollum.

Sadly, the story ends... sadly for Andre.  He now lives out his days in Raleigh, NC where he has a terrible group of friends, has nothing to do but tweet, eat Bojangle's and occasionally lumber around a kickball pitch and pretend that he cares about his day-to-day.

When asked about Andre, a random passerby had this to say: "Who the podfark is that?"

My friends do suck. I am not going to lie about that