Goodbye world... I'll be in my room playing FIFA 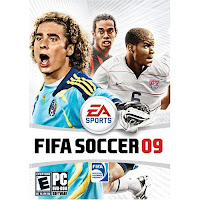 FIFA 09 is here. The game I've been waiting for for months has finally hit the shelves (and subsequently my Xbox 360). I picked the game up on the way to Davidson's soccer game last night, and on the drive back, my excitement grew the closer I got home. When I finally arrived at my house, I tried to control myself. I calmly grabbed a bite to eat, changed into basketball shorts, put away my clothes, put on a load of laundry, and settled in to fully enjoy my video game experience. I opened the video game box, and saw:

I responded to the game's invitation with my own resounding "YES, LET'S!". I popped the game in and proceeded to have at it with all the enthusiasm I could muster. I was able to muster a large amount of enthusiasm, and I had at it with aplomb.

The game itself plays like a dream. One of the main talking points for this year's iteration of the FIFA series is the brand-new physics system through which players actually battle for the ball, jostle each other, challenge headers and go into tackles with a sense of realism heretofore unmatched. A variety of factors go into these situations including body positioning, player strength, weight, height, speed, etc. The end product is much like watching players flying around the pitch like in a real game.

The ball movement and passing has also been tweaked, and they seem to accurately reflect the relative skill of the players and teams involved. For instance, I was able to do fairly well with Manchester City, but I couldn't quite pull off the slick one-touch passing and movement I was able to do with ease playing as Chelsea.

Ball control is no longer as simple as previous FIFA games, and boneheaded plays that were the norm in olden days (like trying to play 5-yard one-two passes out of one's own penalty box) are summarily punished as they should be. Individual players' technical ability is actually reflected in the way they control, pass and shoot the ball. In addition, no longer do players "magically" control balls shot at them from 3 yards away. The added touch of skilled players throwing out moves when direction changes are input on the controller also makes the game that much more enjoyable.

Overall, I think this is the best FIFA yet, and I'll be playing it for months. I may emerge out of my room occasionally for necessary functions such as food, bathroom breaks and a little bit of sun, but otherwise, I'll be unavailable for comment. See you next year.
Posted by A West at 3:30 PM

Email ThisBlogThis!Share to TwitterShare to FacebookShare to Pinterest
Labels: FIFA 09