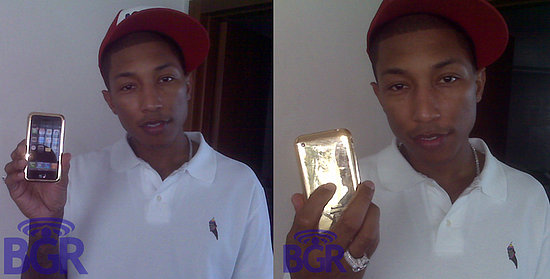 Windows' most recent "I'm A PC" ad campaign is designed to directly combat the long-running, often-comical Mac commercials featuring Justin Long (Accepted, Dodgeball). In the Mac commercials, PC is portrayed as a nerdy, clueless tweed-wearers in comparison to the cool, laid back Mac with everything under control (a lá Alltel's Chad vs. the other phone companies' nerd herd).

In Windows' commercials, PCs are shown to run the gamut from nerds to businessmen to cool musicians like Pharrell Williams of N.E.R.D (pictured holding gold Apple iPhone). When Pharrell showed up, it made me laugh. Pharrell is a PC! I'm pretty sure I'd be a PC as well if I was tossed thousands of dollars and free computers in order to advertise the product. However, since I'm balling on a budget, I had to buy the best available product with the funds allocated. That was a Mac.

Up until last year I hated the smug Mac users who bragged about their computer's superior functionality, cool packaging and immunity to the viruses which plague nearly all PC users. And then I got a MacBook. I fell in love. After the two or three hour adjustment period, I was skating around Leopard like I had been using a Mac all my life. I never wanted to go back to a PC again. I found myself suppressing snide remarks when others complained about "computer problems" and couldn't help but throw in a comment about my Mac from time to time. I had become a Mac person.

I'm not being paid by Mac to use their product. I definitely wasn't being paid by PC to use theirs. But I will give praise where praise is indeed due. While PCs are admittedly a bit more versatile (due to most illegal programs being made for their use), I am fully immersed in the Mac world. I may visit PCland from time to time to check on the little people, but anything more than a day or two and I'll get homesick.
Posted by A West at 9:01 AM

hey pharell knows where it is at. and I am a PC.

oooh and this has nothing to do with your post but i saw one of yo girls in the pit doing her juggling moves. I think you would have speared her if you saw her doing them hahahahaha